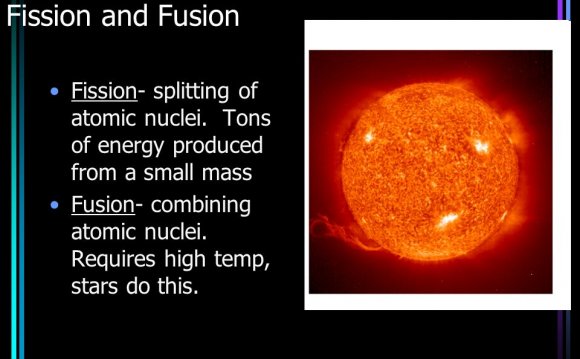 Fission
When an incoming neutron strikes a uranium nucleus, it will break into fragments. Some of the fragments are chemical elements, such as barium or krypton, and some are free neutrons. The free neutrons strike other uranium nuclei, creating a chain reaction.

A nuclear reaction is a process in which atoms collide with other atoms and lose some of their original mass. Because of the principle of energy conservation the lost mass must reappear as generated energy, according to Einstein's equation E = mc². The two types of nuclear reactions used to produce energy are fission and fusion.

In a fission reaction, a heavy atomic nucleus is split into smaller nuclei, other particles and radiation. In a typical reaction, an atom of uranium 235 absorbs a neutron and splits into two lighter atoms, barium and krypton, emitting radiation and neutrons. Under special circumstances (the attainment of a "critical mass") the emitted neutrons can split further atoms, which in turn bring about more splitting, producing a very fast chain reaction. Nuclear power plants exploit the process of fission to create energy.

Fusion
The fusion of deuterium with tritium creates helium-4, frees a remaining neutron, and releases energy. Because E=MC 2, when two atoms are fused, a very small amount of mass can be converted into a large amount of energy.


In a fusion reaction, two or more light atomic nuclei fuse to form a single heavier nucleus. The mass change in the process is the source of nuclear energy. Fusion within the cores of the sun and other stars generates their radiating energy by fusing two hydrogen atoms to produce a helium atom. Current researchers are using magnetic vacuum chambers and laser beams in an attempt to generate the extreme high-temperatures necessary for the fusion process. If successful, the net energy gain would create a viable alternative energy option.