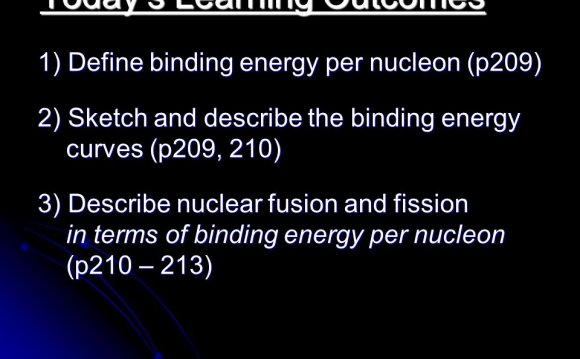 Mass and energy are related to each other by the equation

The masses of particles are often given in atomic mass units (u) rather than in kilograms however we can convert between the two units when we need to;

The mass difference described above represents a loss of energy. The helium nucleus has less energy than the separate nucleons had (remember E=mc2 mass and energy are interchangeable). This is the binding energy.

The binding energy of a nucleus is the energy which would be required to separate the nucleus into its individual separate nucleons.

So for the helium example above with a mass difference of 0.030377 u the binding energy is;

Graph of average binding energy per nucleon against nucleon number

This graph suggest two ways to get energy out of nuclear reactions (i.e. to increase the binding energy per nucleon);

When a neutron hits a uranium nucleus and is captured it causes the nucleus to split into two lighter nuclei and two further neutrons are released. Energy is released in this process mainly in the form of kinetic energy of the fission products.

How to Calculate the Ionization Energy of Atoms ...