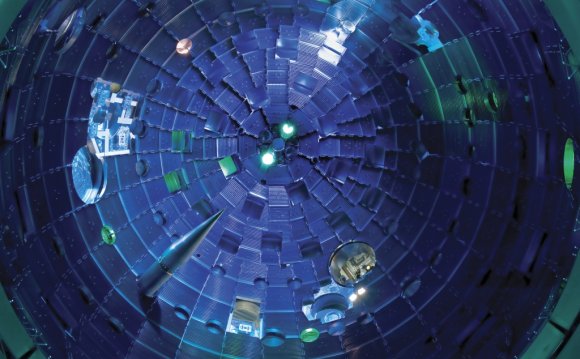 Producing reliable fusion energy — the same process that powers the sun — has long been a holy grail of scientists here on Earth. It releases no greenhouse gases, can be fueled by elements found in seawater and produces no long-lived nuclear waste.

The basic mechanism — getting two nuclei that want nothing to do with each other to fuse — is also difficult enough that there’s no danger of a runaway chain reaction. In fact, scientists so far have struggled to create self-sustained controlled fusion reactions that produce more energy than they consume.

University of Washington researchers have spent two decades developing a novel way to provide plasma stability that’s critical to achieving fusion. With a $5.3 million U.S. Department of Energy grant announced in May, they will partner with Lawrence Livermore National Laboratory to scale up their “Sheared Flow Stabilized Z-Pinch” device in the hopes of achieving a sustainable fusion reaction that might one day power homes or propel spaceships far beyond current limitations.

“Fusion energy is the ultimate energy source. It’s free of greenhouses gases, and it also has the potential to be a very robust source without the reliability problems of wind and solar, ” said UW professor of aeronautics and astronautics Uri Shumlak, who collaborated with UW electrical engineering professor Brian Nelson to develop the device.

It will be the first time that UW researchers have built a fusion device on campus, Shumlak said.

Fusion is the opposite of fission, which splits heavier atoms apart and produces the energy that powers commercial nuclear reactors. Fusing smaller atoms together can yield even greater amounts of energy but does not typically produce unpredictable radioactive isotopes or long-lived radioactive waste. The UW’s experiments, for instance, would be fueled by stable and harmless isotopes of hydrogen that are widely available in nature.

The fusion process does produce neutrons that can pose hazards if not properly controlled, but their behavior is well understood. Neutron therapy, for instance, is used to treat certain types of cancers. UW researchers will closely monitor emissions and follow well-established protocols to ensure those levels pose no risks.

Most university research has focused on the basic science involved in creating, confining and stabilizing plasma, which is a basic ingredient for fusion. Often called the “fourth state of matter, ” plasma forms when a gas is so superheated that electrons are ripped apart from an atom’s nucleus.

Applying enough energy to this swirl of negatively and positively charged particles can induce the nuclei to fuse. Under the right conditions — which have proved devilishly difficult to create outside of stars like the sun — this process gives off more energy than it consumes.

One problem is that simply creating plasma requires such high temperatures — typically greater than 200, 000 degrees Fahrenheit — that nothing material can contain it without disintegrating or melting. One approach to fusion research uses magnetic fields, often generated by gigantic coils that are many stories high, to contain the plasma.

The UW researchers have used a Z-pinch, which is a geometrically simple and elegant approach to fusion that uses an electric current to magnetically confine, compress and heat a long cylinder of flowing plasma. It requires no magnetic coils, which means that the device could be much smaller, cheaper and more versatile than some of the massive fusion machines under development today.