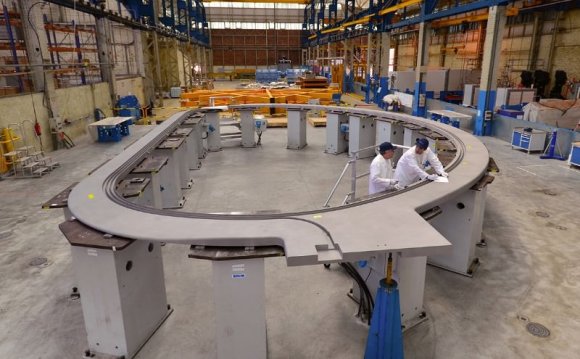 Nobody said it was going to be easy. After years of delays, work has finally begun on key components of ITER, the ambitious international project to build a revolutionary nuclear fusion reactor. ITER remains dogged by its own complexity, however, and its director-general says that it may not now fire up until 2023 – three years later than the most recent official deadline.

ITER’s ultimate aim is to generate energy in the same way that the sun does, by fusing hydrogen nuclei to form helium. It will do this by using a magnetic field to confine a superheated hydrogen plasma inside a doughnut-shaped reactor called a tokamak.

A collaboration between China, Russia, India, Japan Korea, the US and the EU, ITER’s reactor will be larger and far more intricate than any previous tokamak. It will have as many as 10 million parts – its builders call it the puzzle with 10 million pieces – and will sit at the centre of a vast support system. The result will rival the Large Hadron Collider for the title of most complex machine on earth.

Progress on ITER has been slow – it was first conceived during diplomatic talks between US president Ronald Reagan and Soviet leader Mikhail Gorbachev in 1985. Now, at last, the pieces of the puzzle are falling into place, although most of the ITER site, at Cadarache in southern France, is still barren. That is because the real action is taking place elsewhere.

The French Riviera is more generally associated with sun and sea than with mega engineering projects. When I visit the facility in La Seyne-sur-Mer where some of ITER’s biggest components are being prepared, a fierce mistral is blowing off the land to the Mediterranean. CNIM, the contractor that owns the facility, started out as a shipbuilder before turning to precision engineering. Its maritime location is an advantage&colon; many of ITER’s components are so heavy that they have to be transported by sea.

In one of the facility’s climate-controlled warehouses, a huge drill is carving channels into a D-shaped loop of high-grade stainless steel- so large that it takes me nearly a minute to walk its circumference. The steel, chosen for its strength at low temperatures, is so tough that the carbide bits milling it must be replaced every eight minutes. It needs to be&colon; seven of these loops will be stacked on top of each other to form one of the many magnets that will confine and direct hydrogen plasma at up to 100 million °C in the reactor vessel.

Before that, though, a complicated journey lies ahead. The loops’ next stop will be La Spezia, Italy, where a contractor will fit up to 700 metres of superconducting cable to each one; then they will travel to Venice, where another firm, Simic, will complete their assembly into structures called toroidal field coils, each weighing about the same as a fully laden Boeing 747. Simic is also milling some of the loops, so those will have to make a round trip to La Spezia and back.

The coils will then voyage to a French port, where they will be loaded onto a 800-tonne, 352-wheeled crawler that inches through 104 kilometres of countryside, crossing specially strengthened bridges and squeezing through carefully widened roads, to Cadarache. If all goes to plan, the first coils will arrive at the ITER site in about three years’ time.