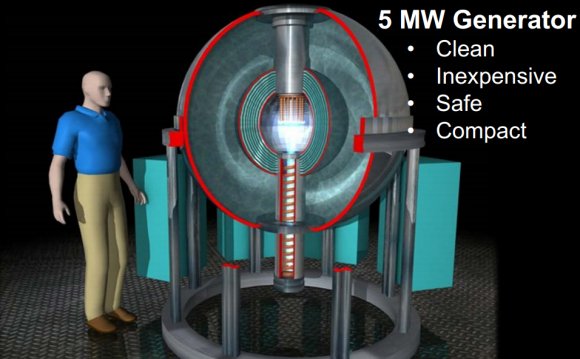 If Focus Fusion reactors are made to work, they will provide virtually unlimited supplies of cheap energy in an environmentally sound way - no greenhouse gases, and no radiation - because the reaction of pB11 is aneutronic.

The plasma focus device consists of two cylindrical copper or berillyum electrodes nested inside each other. The outer electrode is generally no more than 6-7 inches in diameter and a foot long. The electrodes are enclosed in a vacuum chamber with a low pressure gas (the fuel for the reaction) filling the space between them. The plasma focus device is shown in the figure below (Image designed by Glenn Millam).

The Gas used in the DPF: Hydrogen-Boron Fuel

Note that the gas we plan to use in the DPF is a mixture of Hydrogen and Boron. For more about this fuel for a fusion reaction, see our discussion of Deuterium-Tritium vs. Hydrogen-Boron. For an explanation of the research steps needed to use this type of fuel with the DPF, see our research plan, specifically the section on experimental tests and data collection.

A pulse of electricity from a capacitor bank (an energy storage device) is discharged across the electrodes. For a few millionths of a second, an intense current flows from the outer to the inner electrode through the gas. This current starts to heat the gas and creates an intense magnetic field. Guided by its own magnetic field, the current forms itself into a thin sheath of tiny filaments; little whirlwinds of hot, electrically-conducting gas called plasma. A picture of these plasma filaments is shown below along with a schematic drawing. Another picture from a different angle is shown in the banner of this web page, and described here.

This sheath travels to the end of the inner electrode where the magnetic fields produced by the currents pinch and twist the plasma into a tiny, dense ball only a few thousandths of an inch across called a plasmoid. All of this happens without being guided by external magnets.

The magnetic fields very quickly collapse, and these changing magnetic fields induce an electric field which causes a beam of electrons to flow in one direction and a beam of ions (atoms that have lost electrons) in the other. The electron beam heats the plasmoid thus igniting fusion reactions which add more energy to the plasmoid. So in the end, the ion and electron beams contain more energy than was input by the original electric current.

How the energy can be turned directly into electricity

As explained in our “Conventional Fusion vs. Focus Fusion” page, Focus fusion is the only known method that can achieve hydrogen-boron fusion. It also has other advantages over tokamak based deuterium-tritium fusion reactors. Focus fusion reactors will be much less expensive for the same amount of power. Tokamak reactors generate electricity by boiling water for a steam powered generator (high energy neutrons provide the heat.) This is the same method that nuclear fission and coal power plants use. The only difference is the heat source.

In a coal power plant the steam generator is the most expensive part of the plant so replacing the heat source will not result in a lot of savings. Also, this method of generating electricity is limited by the fundamental efficiency limits of heat engines. Focus fusion reactors do not require a heat engine. They generate electricity directly. After all, electricity is just moving charged particles. The particle decelerators in a focus fusion reactor merely transfer the electricity of charged particle beams into a wire. This process does not face the efficiency limits of heat engines.

A focus fusion reactor should be able to economically generate power in quantities as small as 20MW from a power plant the size of a two car garage. This means they will be useful for powering individual villages in the third world where regional electricity grids are not as well developed (for more about focus fusion and poverty, click here). And in developed nations focus fusion power can be generated near where it will be used to reduce transmission losses and can be owned by the communities it serves to reduce dependence on speculative energy markets.