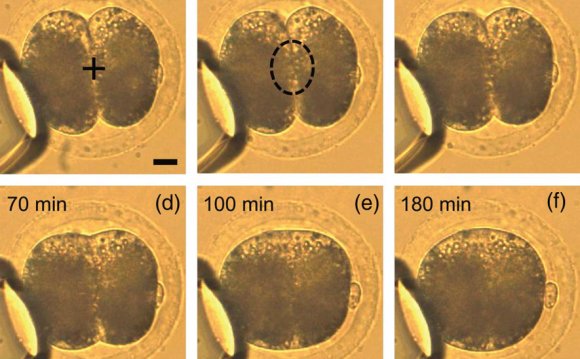 Scientists have been trying to harness the secrets of star power since the days of the Cold War. Now, using a 2-millimeter capsule housed in a cavernous building roughly the length of three football fields, researchers have conducted a landmark experiment, using lasers to create the merest hint of controlled nuclear fusion that produced more energy than was put into the fuel alone.

“This is really an important milestone, ” said UCLA plasma physicist Warren Mori, who was not involved in the work.

It's a long, long way off from "ignition, " the point at which the reaction generates more energy than the powerful laser beams originally poured into the tiny fuel capsule - and there are some significant hurdles to getting to that point, scientists said.

But the findings, described in the journal Nature, give researchers a promising sign that they're on the right path to reaching this goal, one that could one day lead to cleaner nuclear energy, safer weapons and a more profound understanding of powerful astrophysical phenomena such as stars and supernovae.

“We are closer than anyone has gotten before, ” said lead author Omar Hurricane, a plasma physicist at Lawrence Livermore National Laboratory.

Nuclear fusion is the process of fusing two atoms’ nuclei together to create a heavier atom, releasing an incredible amount of energy in the process. In some ways it's the reverse of nuclear fission, which breaks large atoms apart into smaller pieces and releases energy (and a significant amount of radiation). Fission is the process that nuclear power plants use today.

Nuclear fusion is what powers the cores of stars and generates their light; all that intense heat and pressure at their centers can force two atoms to join together and become a whole different element. Stars’ cores begin by fusing two hydrogen nuclei into a single helium atom, and then three helium nuclei into a single carbon, and so on, progressing to heavier and heavier elements.

On Earth, scientists hope to do the same thing, but using two “heavy” hydrogen atoms, deuterium and tritium, as nuclear fuel. Deuterium is a hydrogen atom loaded up with a neutron, and tritium packs two extra neutrons. When they fuse together, they end up as a highly energetic helium atom (2 protons plus 2 neutrons) and a separate spare neutron.

In theory, those energetic helium nuclei should further heat the already-hot, pressurized deuterium-tritium fuel and cause more helium nuclei to form, triggering a runaway reaction. It’s a little like lighting a match to some firewood – you don’t have to put a lot of effort into making it burn if you have the right match and the right wood under the right conditions.

The problem for nuclear fusion is, unless you’re inside a star, it's very difficult to create those conditions – high pressure, high temperature – to get the process going.

“Mother Nature is pretty unforgiving - we're trying to stuff a lot of energy in a very small volume, ” Hurricane said.

Scientists have been trying for decades to figure out how to get a little bit of mass so compact that they could induce nuclear fusion on Earth. There are two main methods, said Mark Herrmann, a plasma physicist at Sandia National Laboratories in Albuquerque. Magnetic confinement fusion uses a magnetic field to contain and compact a plasma fuel, and inertial confinement fusion uses lasers to compact and heat up a tiny jot of fuel.

The scientists working on the experiment at the Livermore lab’s National Ignition Facility had been using the laser-induced method. It's no easy task: The method requires a cavernous facility holding a formidable array of 192 lasers to shoot high energy beams through two tiny holes on either end of a pill-size gold can that is just 1 centimeter long and half a centimeter wide. When the lasers go through the entry holes and hit the gold can’s inside walls, the inside surface starts to give off X-rays, which bathe an even tinier plastic capsule just 2 millimeters wide. This tiny plastic grain is lined inside with deuterium-tritium fuel, a lining just 70 microns thick, barely the width of a human hair.

The X-rays beat down on the plastic rind of the 2-millimeter capsule and cause it to explode, pushing outward even as its contents are pushed inward, squeezing down to a tiny fraction of its original size. At this point, it’s very hot and very dense. With just the right series of shocks from the laser beam, the scientists think they can cause the fuel inside to start fusing together.

But there’s a fundamental problem here: The fuel needs to be under extreme pressures to ignite, but Mother Nature “fights you on it, ” Hurricane said. Instabilities start to form as the mass is compacted – and the scientists have to be able to control it precisely, to make sure the X-rays are hitting the capsule’s surface in a perfectly even way.

ITER and the way towards a fusion reactor