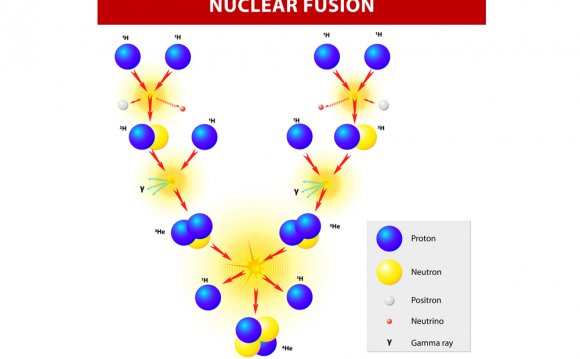 The D-T fusion reaction, is the most efficient reaction known in terms of energy released.
Click on image for full size
Image courtesy of Plasma Physics Laboratory

Nuclear fusion is a process where two or more nuclei combine to form an element with a higher atomic number (more protons in the nucleus). Fusion is the reverse process of nuclear fission. Fusion reactions power the Sun and other stars.

For a fusion reaction to occur it is necessary to bring the nuclei so close together that nuclear forces become important and "glue" the nuclei together. The nuclear force only acts over incredibly small distances and has to counteract the electrostatic force where the positively charged nuclei repel each other. For these reasons fusion most easily occurs in a high density, high temperature environment.

On Earth, nuclear fusion was first reached in the explosion of the Hydrogen bomb. In a non-desctructive manner, fusion has also been reached in different experimental devices aimed at studying the possibility of producing energy in a controlled fashion.