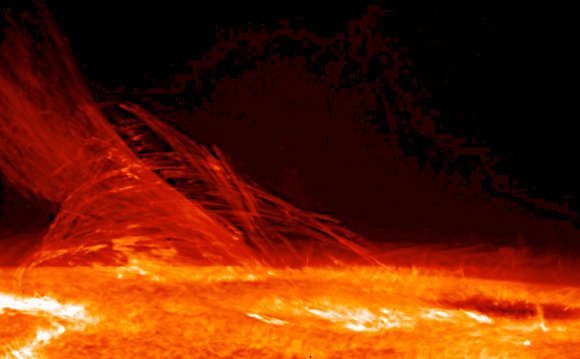 Plasma is often called the "Fourth State of Matter, " the other three being solid, liquid and gas. A plasma is a distinct state of matter containing a significant number of electrically charged particles, a number sufficient to affect its electrical properties and behavior. In addition to being important in many aspects of our daily lives, plasmas are estimated to constitute more than 99 percent of the visible universe.

In an ordinary gas each atom contains an equal number of positive and negative charges; the positive charges in the nucleus are surrounded by an equal number of negatively charged electrons, and each atom is electrically "neutral." A gas becomes a plasma when the addition of heat or other energy causes a significant number of atoms to release some or all of their electrons. The remaining parts of those atoms are left with a positive charge, and the detached negative electrons are free to move about. Those atoms and the resulting electrically charged gas are said to be "ionized." When enough atoms are ionized to significantly affect the electrical characteristics of the gas, it is a plasma.

In many cases interactions between the charged particles and the neutral particles are important in determining the behavior and usefulness of the plasma. The type of atoms in a plasma, the ratio of ionized to neutral particles and the particle energies all result in a broad spectrum of plasma types, characteristics and behaviors. These unique behaviors cause plasmas to be useful in a large and growing number of applications important to our lives and to the world around us.

Origin of the Term "Plasma" for Ionized Gases

Many wonder how the term "plasma" became applied to an ionized gas. Irving Langmuir, a researcher working to understand electric discharges, was the first to use the term in this way. The following explanatory excerpt is from: G. L. Rogoff, Guest Editorial, Special Issue on Applications of Partially Ionized Plasmas, G. L. Rogoff, Ed., IEEE Transactions on Plasma Science, vol. 19, p. 989, Dec. 1991. (See helpful below.)

During the 1920's Irving Langmuir was studying various types of mercury-vapor discharges, and he noticed similarities in their structure - near the boundaries as well as in the main body of the discharge. While the region immediately adjacent to a wall or electrode was already called a "sheath, " there was no name for the quasi-neutral stuff filling most of the discharge space. He decided to call it "plasma."

While his relating the term to blood plasma has been acknowledged by colleagues who worked with him at the General Electric Research Laboratory, , , the basis for that connection is unclear. One version of the story has it that the similarity was in carrying particles, while another account speculated that it was in the Greek origin of the term, meaning "to mold, " since the glowing discharge usually molded itself to the shape of its container. In any case, it appears that the first published use of the term was in Langmuir's "Oscillations in Ionized Gases, " published in 1928 in the Proceedings of the National Academy of Sciences .

Thus the term "plasma" was first used to describe partially (if not weakly) ionized gases. The term plasma apparently did not find immediate widespread use in the scientific community. It did eventually catch on, however, but in some cases the term was inappropriately limited to highly ionized gases.

Discharge: An electric discharge is the glowing gas that carries electricity between two electrodes when voltage is applied between them.