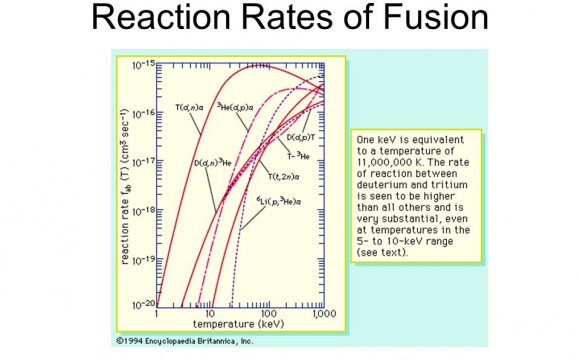 One of the primary nuclear reactions, the name usually designating an energy-releasing rearrangement collision which can occur between various isotopes of low atomic number. See Nuclear reaction

Interest in the nuclear fusion reaction arises from the expectation that it may someday be used to produce useful power, from its role in energy generation in stars, and from its use in the fusion bomb. Since a primary fusion fuel, deuterium, occurs naturally and is therefore obtainable in virtually inexhaustible supply, solution of the fusion power problem would permanently solve the problem of the present rapid depletion of chemically valuable fossil fuels. As a power source, the lack of radioactive waste products from the fusion reaction is another argument in its favor as opposed to the fission of uranium. Nuclear fission

In a nuclear fusion reaction the close collision of two energy-rich nuclei results in a mutual rearrangement of their nucleons (protons and neutrons) to produce two or more reaction products, together with a release of energy. The energy usually appears in the form of kinetic energy of the reaction products, although when energetically allowed, part may be taken up as energy of an excited state of a product nucleus. In contrast to neutron-produced nuclear reactions, colliding nuclei, because they are positively charged, require a substantial initial relative kinetic energy to overcome their mutual electrostatic repulsion so that reaction can occur. This required relative energy increases with the nuclear charge , so that reactions between low- nuclei are the easiest to produce. The best known of these are the reactions between the heavy isotopes of hydrogen, deuterium, and tritium.

Nuclear fusion reactions can be self-sustaining if they are carried out at a very high temperature. That is to say, if the fusion fuel exists in the form of a very hot ionized gas of stripped nuclei and free electrons termed a plasma, the agitation energy of the nuclei can overcome their mutual repulsion, causing reactions to occur. This is the mechanism of energy generation in the stars and in the fusion bomb. It is also the method envisaged for the controlled generation of fusion energy.

The cross sections (effective collisional areas) for many of the simple nuclear fusion reactions have been measured with high precision. It is found that the cross sections generally show broad maxima as a function of energy and have peak values in the general range of 0.01 barn (1 barn = 10-24 cm2) to a maximum value of 5 barns, for the deuterium-tritium (D-T) reaction. The energy releases of these reactions can be readily calculated from the mass difference between the initial and final nuclei or determined by direct measurement.

Some of the important simple fusion reactions, their reaction products, and their energy releases are:

If it is remembered that the energy release in the chemical reaction in which hydrogen and oxygen combine to produce a water molecule is about 1 eV per reaction, it will be seen that, gram for gram, fusion fuel releases more than 1, 000, 000 times as much energy as typical chemical fuels.