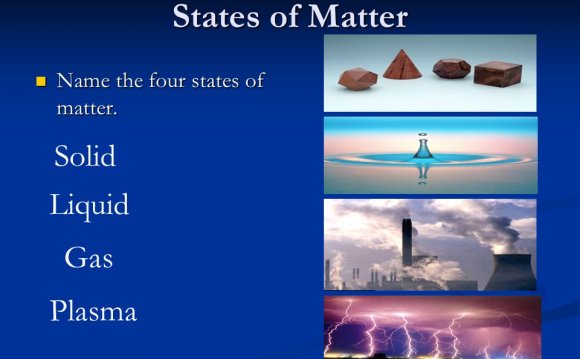 This phase diagram of water shows its phases at various temperatures and pressures. Matter can exist in four phases (or states), solid, liquid, gas, and plasma, plus a few other extreme phases like critical fluids and degenerate gases.

Generally, as a solid is heated (or as pressure decreases), it will change to a liquid form, and will eventually become a gas. For example, ice (frozen water) melts into liquid water when it is heated. As the water boils, the water evaporates and becomes water vapor.

Solid:
A solid is matter in which the molecules are very close together and cannot move around. Examples of solids include rocks, wood, and ice (frozen water).

Liquid:
A liquid is matter in which the molecules are close together and move around slowly. Examples of liquids include drinking water, mercury at room temperature, and lava (molten rock).

Gas:
A gas is matter in which the molecules are widely separated, move around freely, and move at high speeds. Examples of gases include the gases we breathe (nitrogen, oxygen, and others), the helium in balloons, and steam (water vapor).

Plasma:
A plasma is a gas that is composed of free-floating ions (atoms stripped of some electrons - positively charged) and free electrons (negatively charged). A plasma conducts electrical currents. Plasma was discovered by William Crookes in 1879. There are many different types of plasmas. There is plasma in stars (including our Sun); the solar wind in our Solar System is made of plasma.

Degenerate Gas:
A degenerate gas is one that is super-compressed and very dense. The molecules of this degenerate gas are virtually touching one another and the gas acts much like a solid. Unlike gases under normal conditions, the temperature in a degenerate gas does not depend on the pressure. These gases follow quantum mechanical laws.

Worksheets and Activities about Phases of Matter:

The World Between Four States of Matter العالم ...