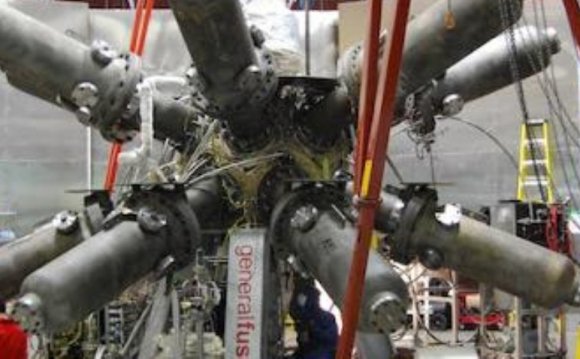 At the United Nations Conference on Climate Change being held in Paris at the moment, nuclear fusion is being talked about as the ‘Holy Grail’ of clean energy technology. So what is nuclear fusion? Isn’t that what nuclear reactors are all about? Well, not quite. The nuclear reactors we use today to produce energy use fission, not fusion. Here’s a handy breakdown of the differences between nuclear fission and nuclear fusion (source UCDavis):

With fusion energy, one tablespoon of liquid hydrogen fuel would produce the same energy as 28 tons of coal with no radioactive waste. While we have fusion reactors in operation today, they require far more electricity to operate than they actually produce. Using the most efficient fusion reactors we have, twice as much electricity is burnt as is produced. When asked about the 3 inventions that will change the world, Elon Musk cited fusion energy stating:

While the problem may be one of the most difficult to solve, it’s not just a pipe dream. Fusion energy startups have drawn investment dollars from billionaires like Jeff Bezos, Peter Thiel, and Paul Allen. Here are 3 startups trying to commercialize one of the most promising sources of energy there is.

Redmond Washington based Helion Energy has taken in just around $12 million from Peter Thiel’s venture capital firm Mithril Capital Management, Capricorn Investment Group, and prestigious startup accelerator Y Combinator. Helion claims to be making a fusion engine 1, 000 times smaller, over 500 times cheaper, and realizable 10 times faster than other projects. Here’s a look at how their fusion engine will operate:

Helion has also taken in $5 million in grants from the U.S. Department of Energy. The Company aims to have a commercial plant operational in just 6 years’ time.

Founded in 1998, California based Tri Alpha Energy has said to have taken in anywhere between $140-$200 million in funding so far from the likes of Paul Allen’s venture capital firm Vulcan Capital, Goldman Sachs, and Venrock. This 150 employee Company has been operating in stealth mode for the past 17 years, and finally unveiled a website just this year. Their big breakthrough came this year when they heated a ball of hydrogen plasma to 10 million degrees Celsius and held it steady for 5 milliseconds with no decay. Apparently in the world of fusion energy, this is an incredible feat. However, in order to actually get more energy out of fusion than you put in, you would need to hold that steady for one second, an eternity at the rate they are going. As one expert commented, “I give them the benefit of the doubt. I want to watch them for the next 2 or 3 years”.