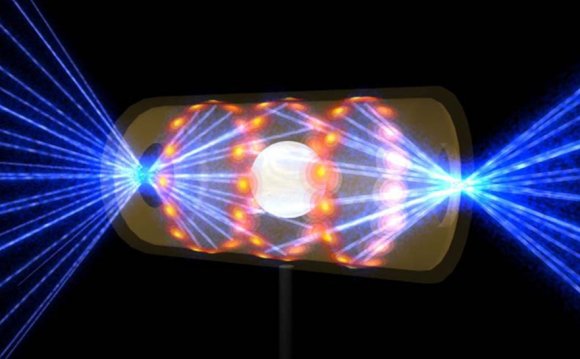 Scientists are reporting a significant advance in the quest to develop an alternative approach to nuclear fusion. Researchers at Sandia National Laboratories in Albuquerque, New Mexico, using the lab’s Z machine, a colossal electric pulse generator capable of producing currents of tens of millions of amperes, say they have detected significant numbers of neutrons—byproducts of fusion reactions—coming from the experiment. This, they say, demonstrates the viability of their approach and marks progress toward the ultimate goal of producing more energy than the fusion device takes in.

Fusion is a nuclear reaction that releases energy not by splitting heavy atomic nuclei apart—as happens in today’s nuclear power stations—but by fusing light nuclei together. The approach is appealing as an energy source because the fuel (hydrogen) is plentiful and cheap, and it doesn’t generate any pollution or long-lived nuclear waste. The problem is that atomic nuclei are positively charged and thus repel each other, so it is hard to get them close enough together to fuse. For enough reactions to take place, the hydrogen nuclei must collide at velocities of up to 1000 kilometers per second (km/s), and that requires heating them to more than 50 million degrees Celsius. At such temperatures, gas becomes plasma—nuclei and electrons knocking around separately—and containing it becomes a problem, because if it touches the side of its container it will instantly melt it.

Fusion scientists have been laboring for more than 60 years to find a way to contain superhot plasma and heat it till it fuses. Today, most efforts are focused on one of two approaches: Tokamak reactors, such as the international ITER fusion project in France, hold a diffuse plasma steady for seconds or minutes at a time while heating it to fusion temperature; laser fusion devices, such as the National Ignition Facility in California, take a tiny quantity of frozen hydrogen and crush it with an intense laser pulse lasting a few tens of billionths of a second to heat and compress it. Neither technique has yet reached “breakeven, ” the point at which the amount of energy produced by fusion reactions exceeds that needed to heat and contain the plasma in the first place.

Sandia’s technique is one of several that fall into the middle ground between the extremes of laser fusion and the magnetically confined fusion of tokamaks. It crushes fuel in a fast pulse, as in laser fusion, but not as fast and not to such high density. Known as magnetized liner inertial fusion (MagLIF), the approach involves putting some fusion fuel (a gas of the hydrogen isotope deuterium) inside a tiny metal can 5 millimeters across and 7.5 mm tall. Researchers then use the Z machine to pass a huge current pulse of 19 million amps, lasting just 100 nanoseconds, through the can from top to bottom. This creates a powerful magnetic field that crushes the can inward at a speed of 70 km/s.

While this is happening, the researchers do two other things: They preheat the fuel with a short laser pulse, and they apply a steady magnetic field, which acts as a straitjacket to hold the fusion fuel in place. Crushing the plasma also boosts the constraining magnetic field, from about 10 tesla to 10, 000 tesla. This constraining field is key, because without it there is nothing to hold the superheated plasma in place other than its own inward inertia. Once the compression stops, it would fly apart before it has time to react.

The Sandia researchers reported this week in Physical Review Letters that they had heated the plasma to about 35 million degrees Celsius and detected about 2 trillion neutrons coming from each shot. (One reaction of fusing two deuteriums produces helium-3 and a neutron.) Although the result shows that a substantial number of reactions is taking place—100 times as many as the team achieved a year ago—the group will need to produce 10, 000 times as many to achieve breakeven. “It is good progress but just a beginning, ” says Sandia senior scientist Mike Campbell. “We need to get more energy into the gas and increase the initial magnetic field and see if it scales in the right direction.”

One significant aspect of the results is that the researchers also detected neutrons coming from the fusion of deuterium and tritium, another hydrogen isotope. The main reaction, deuterium with deuterium, or D-D, produces either helium-3 or tritium. Those reaction products would normally be traveling fast enough to fly out of the plasma without reacting again. But the intense constraining magnetic field forces the tritium to follow a tight helical path in which it is much more likely to collide with a deuterium and fuse again. The researchers detected 10 billion neutrons from deuterium-tritium (D-T) fusions. “To me, the most interesting data was the secondary D-T neutrons, which is very highly suggestive that the original [10 tesla] field was frozen in the plasma and reached values of [about 9000 tesla] at stagnation, ” Campbell says.