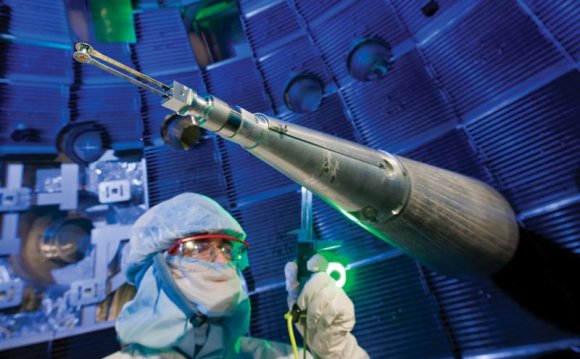 Nuclear fusion reactions involve the fusing of light elements (such as hydrogen) to form heavier ones (such as helium). Nuclear fusion is the process that powers the stars, transforming mass into energy according to Einstein's formula E= m.c2.

The worldwide research on controlled thermonuclear fusion aims to realize fusion on earth, as a means to produce energy in a way that is both clean and safe. Fusion produces no greenhouse gases, no toxic or long-lived radioactive waste (only the reactor structure becomes slightly activated after a while) and neither is there any danger of major nuclear accidents like Tsjernobyl or Fukushima. Fusion is one of the few options available for sustainable energy production, to counter global warming and yet meet the steadily increasing energy demands of the 21st century. Contrary to solar and wind energy, fusion has the potential to provide large and local sources of continuous base-load power everywhere in the world.

Through e European Union maintains an ambitious research programme targeted at realizing fusion electricity by 2050. The main focus of the research is on magnetic confinement fusion, in particular the tokamak concept, whereby the fusion reactions take place in a hot plasma confined by strong magnetic fields. In collaboration with fusion research centres all over the world, this is presently culminating in the ongoing construction of the international fusion device ITER at the Cadarache site near Aix-en-Provence in France, as well as the design of the first fusion demonstration reactor DEMO.

From left to right: inside view of the JET vessel with the ITER-like wall, the plasma in ASDEX Upgrade and a cut of the ITER vessel embedded in its cryostat harbouring the superconducting coils.

At the UGent department of Applied Physics, the research unit Nuclear Fusion has been involved in fusion research since over thirty years. The group has an extensive world-wide network of collaborations and contacts in fusion research, and is since many years recognized as an important player and a respected centre of excellence in the fusion community. The research in the unit is organized along three core areas:

1. Plasma heating and control using the ion cyclotron range of frequency (ICRF) method
Electromagnetic wave heating is one of the methods to obtain the tremendous plasma temperatures needed for fusion to occur. The research investigates the physics and technological aspects of this heating method and the processes that accompany it.

Nuclear Physics 9: Energy from the Nucleus