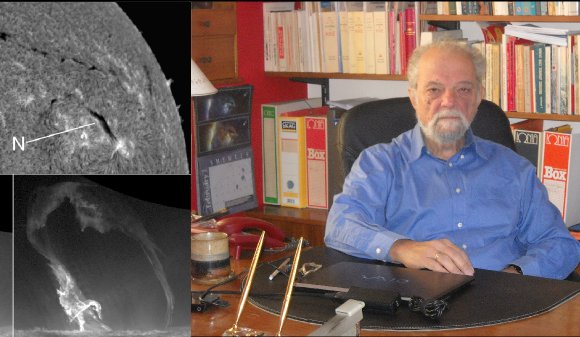 OUTLINE OF THE PROJECT

The sun and the Heliosphere are our closest astrophysical laboratories. Our life is effected from the activity of our star. The sun is active and undergoing dramatic explosions that effect the life here in earth. Our dependence on the large fleet of satellites traveling near earth makes the study of the explosive events a necessary subject for the next decade. The three events supported by EEC have analyzed in depth the physical processes taking place in the solar interior and the solar atmosphere and how they effect the Heliosphere. The major energy source for our lives here in Earth is in the core of the sun. The transfer of energy from the sun to Earth is a difficult scientific problem due to the large number of different scales involved in the physical processes taken place in the energy propagation from the Sun’s core to the outer Helliosphere.

In all three events organized in different European cities, the solar interior, the solar atmosphere the solar wind were studied. Substantial emphasis was given to the study of the explosive events (flares and Coronal Mass Ejection (CME)).

The first event was organized in Halkidiki, near Thessaloniki, Greece. More than 150 scientists attended and a substantial fraction of them were young graduate students and post doctoral. The major part of the EEC funding was directed to young participants and the invited speakers. The proceedings were published by Springer Verlag (Lectures in Physics series).

The second event was organized in Orsay, near Paris. The subject of the conference was “Space solar physics.” It attracted 60 young participants and around 10 lecturers. The proceedings were published by Springer Verlag (Lectures in Physics series). The funding was directed mostly to the young scientists and the lectures.

The third and final event was held in Florence. It attracted almost 250 participants and a substantial number of young scientists. The meeting was considered a major success and mapped the strategy for our research in Solar physics for the next millennium. The proceedings were published by ESA.

Several invited reports, presented during the meeting, have demonstrated major departures from our traditional view of the structure of the solar atmosphere and its interaction with the Heliosphere. It is worth mentioning a few:

Paterno(Italy) discussed recent results from the helioseismic networks IRIS and BISON which permitted to measure the lowest degree p-mode splitting and infer the rotation of the central region of the Sun below 0.3 Ro. We expect to learn a lot from the detection and identification of g-modes (if they exist) from the forthcoming data from Golf instrument on SOHO satellite.

The solar activity is apparently chaotic and is consistent with the observed behavior of other stars of similar age and mass. The crucial parameter is the rotation rate W, which decreases a star grows older owing to magnetic breaking. Weiss(UK) reported an elegant way to explore the solutions of this difficult problem by using a system of three coupled no-linear differential equations. In his model there is a transition from a non-magnetic state to one with periodically reversing fields as W increases, followed by a periodic modulation of the basic cycle and then by chaos.

Solanki (Switzerland) reported new results on the dynamics of flux tubes and emphasized the observed oscillations, his report followed by new exciting results from Roberts(UK) and Ulmschneider(Germany) on the theoretical interpretation of the wave activity on flux tubes. Special emphasis was given on the generation of these oscillations.