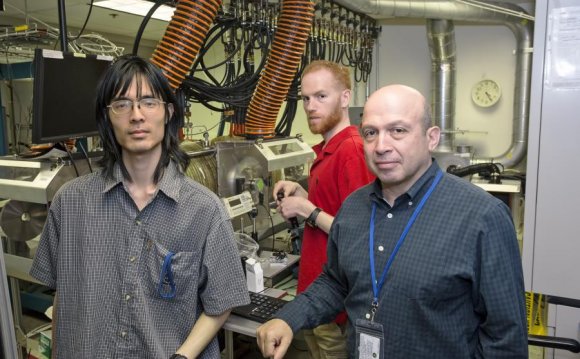 Controling a lab from home

The Remote Control Glow Discharge (RGDX) is a plasma that you can control from the comfort of your browser. YOU have control of the entire experiment including the gas pressure inside the tube, the voltage produced by the power supply that makes the plasma, and the strength of an electromagnet surrounding the plasma. You can perform experiments from any computer anywhere in the world!

In 2002, we began developing plasma sources for educational purposes and one of our devices won 2nd place in the National Apparatus Competition sponsored by the American Association of Physics Teachers. In 2003, we began controlling our plasma sources by computer for a plasma exhibit in a science museum. The progression of this has led to remote control of a plasma from any location by anyone with an internet connection. This type of control could serve as an experimental component of an online physics class or for a school that typically does not have plasma physics equipment.

As with all other Science Education Department labs, the RGDX has been developed in large part by high school and undergraduate interns.

The Remote Glow Discharge Experiment was officially released to the public on 3/12/2014. The story can be found here.

To start using the RGDX, press the "Access RGDX" button on the left or click on the link below:

Currently, the RGDX is not supported by mobile devices (for example, iPhones and iPads) or Linux computers, but we're working on getting it implemented on more platforms…stay tuned!

Reserve a Place in the Queue

The RGDX can be used in a classroom as an interactive plasma experiment. To help instructors, we've implemented a reservation system. Just email us at rgdx@pppl.gov and tell us your name, institution, email, and what time period you'd like to reserve it (INCLUDE TIME ZONE) and we'll send you an email with a special link that will grant you access for the alloted time.