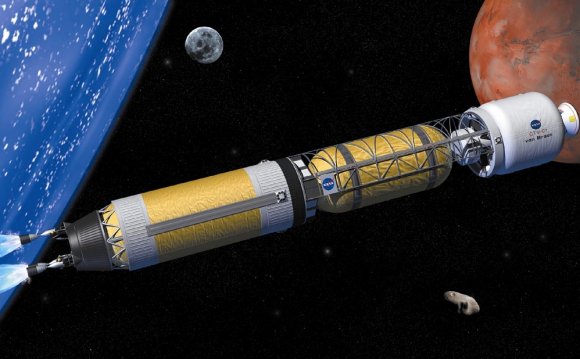 A concept image of a spacecraft powered by a fusion-driven rocket. In this image, the crew would be in the forward-most chamber. Solar panels on the sides would collect energy to initiate the process that creates fusion.

Sending astronauts to Mars aboard a superfast spacecraft powered by nuclear fusion may seem like a sci-fi dream, but it's entirely attainable, scientists say.

The physics behind a fusion-driven rocket have been demonstrated in the laboratory, so such a device may well be propelling people on 90-day trips to the Red Planet in a matter of decades, according to a team of researchers working on the technology.

"This is a reality, basically, " Anthony Pancotti, of the space-propulsion company MSNW, said Sept. 25 during a presentation with NASA's Future In-Space Operations working group. "Fusion occurs in the sun, and also in our labs." [Superfast Propulsion Concepts (Images)]

A trip to Mars and back takes about 500 days using traditional chemical propulsion systems. Spending so much time in deep space poses serious health risks for astronauts, who would be exposed to lots of radiation and would have to exercise like mad to minimize bone and muscle loss.

Developing a faster propulsion system is thus a chief goal of NASA, which aims to get people to the vicinity of the Red Planet by the mid-2030s. The space agency has funded Pancotti's fusion-rocket team — led by John Slough of the University of Washington — through its NASA Innovative Advanced Concepts program, or NIAC.

"We feel we've defined a very good problem, a very good mission, and we're focused on the fusion device to fit this mission, " he said.

Because nuclear fusion is an extremely efficient and powerful energy source, this mission could be accomplished in a single launch of the most powerful version of NASA's Space Launch System mega-rocket, which is in development. It would take perhaps nine launches to mount such an effort with chemical propulsion, Pancotti said.

How it would work

Fusion occurs when the nuclei of two or more atoms combine, releasing energy. The sun and other stars convert this energy to light, and the phenomenon also gives hydrogen bombs their enormous destructive power.

The team's fusion-driven rocket would rely on a plasma created using deuterium and tritium, "heavy" isotopes of hydrogen. ("Normal" hydrogen contains no neutrons, while deuterium has one and tritium contains two.)

Bubbles of this plasma would be injected into a chamber, where a magnetic field would collapse metal rings around them, briefly compressing the bubbles into a fusion state. The energy released by the fusion reactions would vaporize and ionize the metal, which would be accelerated out the back of the spacecraft through a nozzle, creating thrust.

Solar panels would generate the energy necessary onboard the spacecraft to put all of this in motion.

There is no reason to doubt the feasibility of such a concept, Pancotti said.

"This is probably the most simple and straightforward, lowest-cost fusion propulsion system you can think of, " he said. "The fundamental physics have been proven in the laboratory with hardware, and fusion yields, neutrons, have been produced. So what I'm talking about is building a device with known physics and with a proven method."

Further, that device can be built using commercial off-the-shelf components, so no engineering leaps should be required, Pancotti added.

Slough and his team are building hardware and conducting experiments to help bring the technology closer to implementation. They hope to check off a big milestone sometime in 2014.

"We're in the lab, we're building the coils, we're showing the scaling and we'll be producing the neutrons within the next year to show that fusion is occurring, and it's occurring at the scales required to build a fusion-driven rocket, " Pancotti said.

Gasp! Lockheed Skunk Works Says It Has A Nuclear Fusion ...