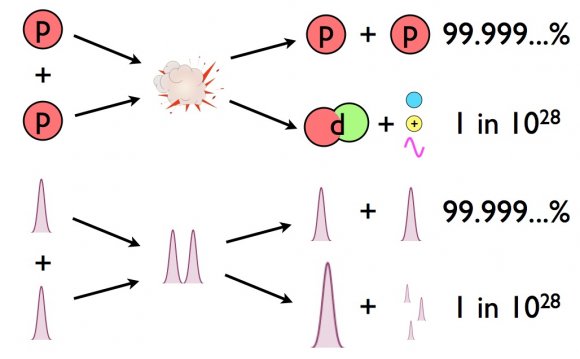 They turned the heat on the reactor up to a staggering 80million degrees celsius – more than seven times the heat at the centre of the Sun.

Dr Hans-Stephan Bosch of the IPP said: “With a temperature of 80 million degrees and a lifetime of a quarter of a second, the device’s first hydrogen plasma has completely lived up to our expectations.”

Hydrogen fusion occurs in the sun

In the sun, hydrogen atoms become compressed under the immense pressure and heat, which creates energy in a process known as nuclear fusion.

By superheating plasma inside a magnetic field in the reactor – as to not let it touch the sides – the team can recreate the conditions of the sun.

Ultimately, the aim is to create a nuclear fusion power plant which would produce environmentally friendly energy in the same way the Sun would.

The core of the sun

A statement from the IPP read: “The objective of fusion research is to develop a power plant favourable to the climate and environment that derives energy from the fusion of atomic nuclei just as the sun and the stars do.

“As the fusion fire only ignites at temperatures of more than 100m degrees [Fahrenheit], the fuel – a thin hydrogen plasma – must not come into contact with cold vessel walls.

The interior of a nuclear reactor

“Confined by magnetic fields, it floats virtually free from contact within the interior of a vacuum chamber.”