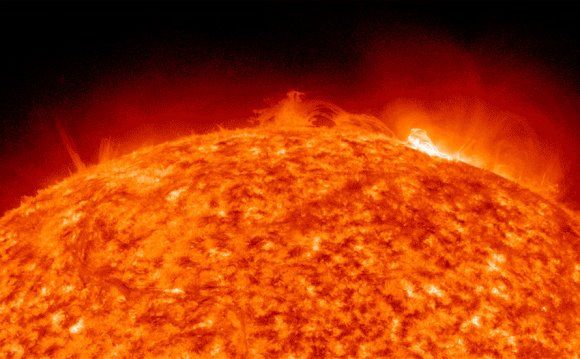 If the world ran on nuclear fusion, the Earth could provide us with the resources to meet current energy demands for billions of years. So it’s no wonder that scientists have spent 60 years pouring billions of dollars into developing the technology.

Commercial viability is still a long way off for fusion, but Lawrence Livermore National Laboratory researchers announced today that they have reached a long-sought milestone: the fuel used to create fusion in their reactor is capable of producing more energy than required to initiate fusion. They published their work in Nature today.

Unlike fission, which works by splitting atoms and is used in nuclear power plants, fusion works by joining two atoms together. When the atoms’ nuclei fuse, they release an incredible amount of energy. We experience this process every day via the Sun, which, deep at its core, contains a natural fusion reactor. The energy it produces is powerful enough to create the light and heat that make life here on Earth possible.

The Livermore reactor is complex. The fusion process begins with 192 lasers, which heat a cylinder (pictured above) that measures just 1 centimeter across to millions of degrees. Nestled inside of the cylinder is a tiny plastic pellet, and inside of the pellet are two forms of hydrogen plasma — the fuel. When the cylinder heats up, it produces x-rays that cause the pellet to explode, compressing the gas.

Only 1/200th of the laser’s energy makes it to the hydrogen atoms. The more energy the atoms receive, the more fusion happens, and, eventually, a chain reaction occurs and the fusion becomes self sustaining. That’s known as ignition. While the scientists have not yet accomplished ignition, today’s paper details that for the first time, the fuel produced more energy than it received–up to 2.6 times more energy.

That’s 10 times better than previous experiments. However, remember that only 1/200th of the original energy output by the lasers makes it to the hydrogen. That means that overall the reactor is still losing far more energy than it puts out.

Plenty of work still remains for fusion researchers. To accomplish ignition, the hydrogen needs to reach temperatures of hundreds of millions of degrees instead of just millions of degrees. It also needs to be subject to pressure levels a thousand times greater.

Nuclear Fission is killing Earth and us